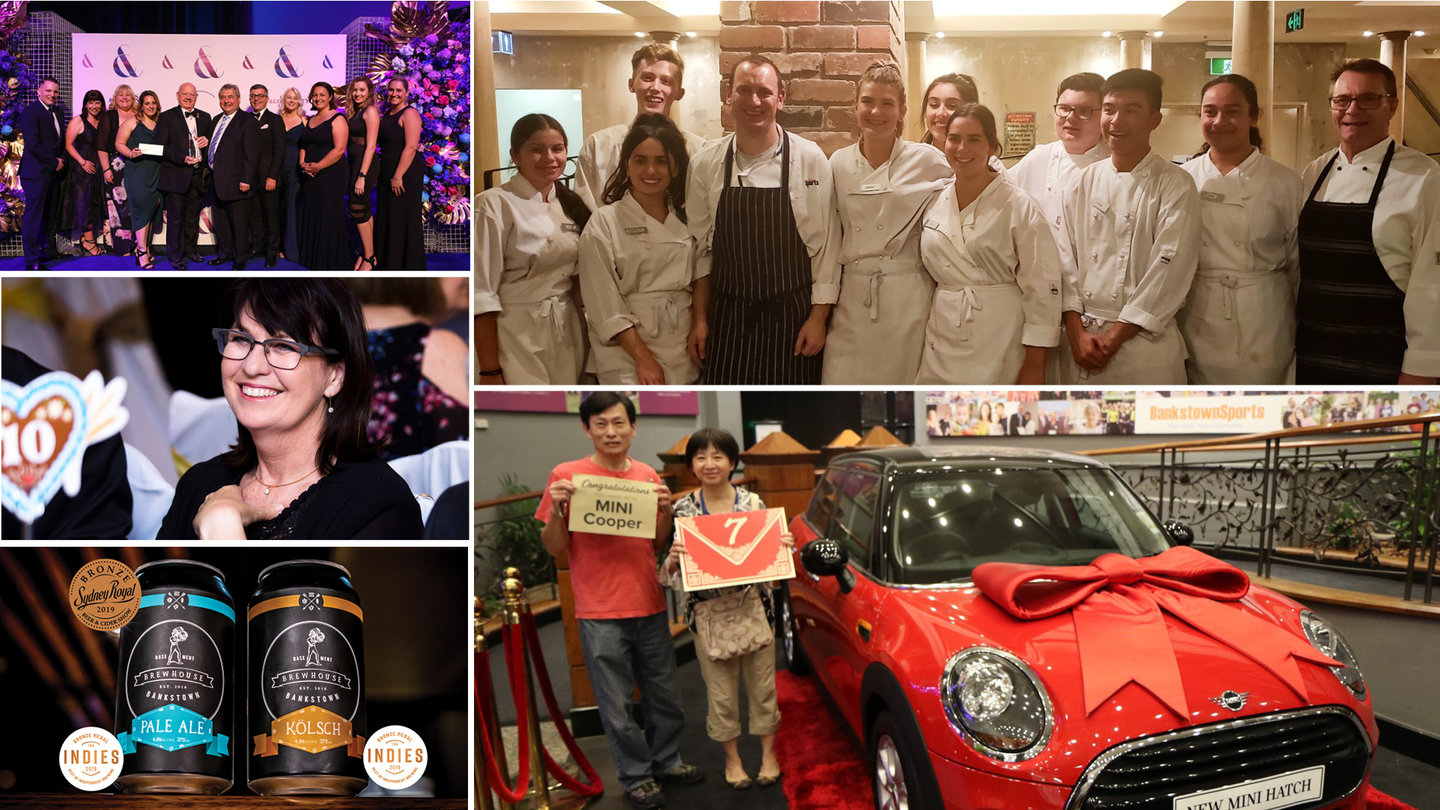 Here’s a look back at all the major events, achievements and honours our clubs celebrated this year.

Bankstown Sports kicked off the year ready to make a difference and become a more sustainable organisation, by phasing out plastic straws at all venues and replacing them with environmentally friendly Austraw Paper Eco-Straws, which are biodegradable and compostable.

In February, we gave one lucky winner a Mini Cooper as the Lucky Red Envelope promotion came to an end. Bankstown Sports was proud to support Little Wings’ Run the Runway fundraiser by providing breakfast and drinks for all participants.

As part of our commitment to be a highly sustainable community organisation, Bankstown Sports teamed up with Hoxton Industries in March for glass, aluminium and plastic recycling.

In May, Basement Brewhouse hosted their first eating challenge and Yaun Yeat demolished a Double Mighty Brewbeast with four beef patties, four rashers of bacon, four slices of cheese, lettuce, tomato and onion on a brioche bun with a serving of fries AND a Brewhouse Shake in under 4 minutes!

June was an exciting month as Bankstown Sports Director, Martin Klumpp, was awarded a Medal of the Order of Australia (OAM) in the Queen’s Birthday Honours. UFC Bankstown opened on Level 1 of Flinders Centre and held an open day with wrestling and Muay Thai demonstrations.

In July, we celebrated the outstanding achievements of our sporting teams and individuals from our Baulkham Hills Sporting Clubs at the annual Sportsperson of the Year Awards.

In August, Flinders Centre Early Learning School officially opened, and Bankstown Sports employees ran a donation drive for the wonderful people at the Dandelion Support Network. Bankstown Sports provided close to half a million dollars in ClubGRANTS funding directly to local community organisations, focusing on the priority areas of mental health, social inclusion and obesity. We finished the month on a high as the Basement Brewhouse Pale Ale won Bronze at the 2019 Sydney Royal Beer & Cider Show.

Basement Brewhouse continued to achieve success in September as they won Bronze in the Australian-style Pale Ale and German-style Kolsch beer categories at the Independent Beer Awards (Indies). Bars at Bankstown Sports and the associated venues introduced a range of non-alcoholic spirits, which have proven to be popular among the “designated drivers”. We unveiled a brand-new dining offering, showcasing the best in German cuisine. Bavarian Express was intended to be an exclusive pop-up offering, however, due to overwhelming demand, it is here to stay!

In October, Bankstown Sports was recognised for its contribution to Punchbowl Boys High School at the Clubs & Community Awards; and we celebrated another year of hard work, dedication and the remarkable achievements of our volunteers from our 47 associated sporting clubs, during the annual Service to Sport Medal and Awards night.

In November, we supported the Litres for Land initiative by providing tip jars throughout the venues and we got involved in Canterbury-Bankstown Council’s White Ribbon Day Tug O’ War event. Our latest dining precinct, Canton Kitchen was unveiled, offering artisan dim sum focused lunches and an extensive a la carte  menu.

In December, we partnered with the Salvation Army to host a giving tree and were overwhelmed by our patrons’ generosity. Our final Members Draw for the year came to an end and one lucky winner walked away $63,000 richer!

We would like to take this opportunity to thank each and every one of our members and guests for their ongoing support this year, and we look forward to another successful and prosperous year in 2020.