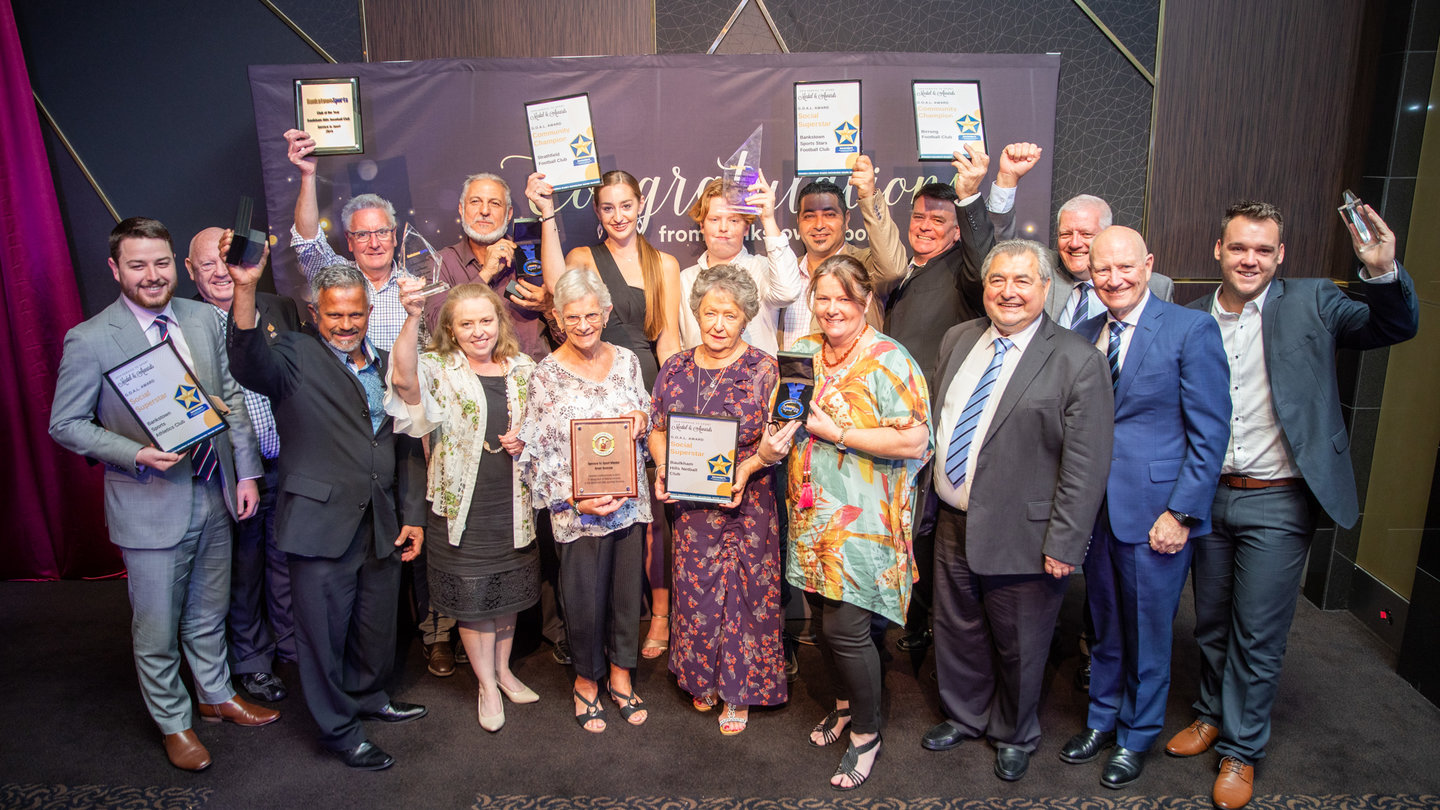 SERVICE TO SPORT MEDAL AND AWARDS 2019

On Monday, 21 October, The Grand Ballroom was transformed into a circus big top in celebration of Bankstown Sports’ annual Service to Sport Medal and Awards Night. The event honours volunteers and celebrates the successes of Bankstown Sports - Sports Network. Attendees experienced the magic of the circus up-close with stilt walkers, a silk aerialist, contortionist and a juggler, while enjoying themed canapes and fairy floss topped beverages! Guests were later treated to a three-course meal and indulged in a desert grazing board.

Junior Club Spirit Award
The formalities kicked off with a new award that recognises young people who have demonstrated positive club spirit. The award went to Cameron Sparks from Baulkham Hills Hawks AFL Club. Since starting with the club 11 years ago in the Auskick program, Cameron has become increasingly involved in activities within the club both on and off the field, including coaching, umpiring, serving at the canteen and setting up the fields. As club captain, Cameron demonstrates true sportsmanship at all times.

Young Volunteer of the Year
The Young Volunteer of the Year Award went to Nathan Loveday, Secretary of Bankstown Sports Touch Association. Nathan has been with the club for 15 years and, during this period, he has been recognised as a leader in administration, including organising fundraising initiatives and sponsorships, as well as coaching and managing for the club.

Volunteer of the Year
Cath Hughes has been involved with the Baulkham Hills Football Club for over 15 years and was named Volunteer of the Year on the evening. Cath facilitates communication, community engagement and equipment management, as well as coordinating the club’s Annual Report and uniform distribution. Cath played an integral role in the Ted Horwood Reserve Working Party, which saw the precinct earn government funding to upgrade the facilities.

Club of the Year
Baulkham Hills Baseball Club deservedly won Club of the Year for its outstanding work with recruiting and retaining players, developing inclusive programs and its commitment to fundraising.

Service to Sport Medals
We also acknowledged three volunteers who have contributed above and beyond for their clubs ongoingly for many years, with our Service to Sport Medals. Congratulations to Harry Chahoud from Bankstown Sports Junior Rugby League Club and Keith Rozairo from Bankstown Sports Touch Association. We also gave posthumous honours to Brian Bowyer, who sadly passed away this year. Brian’s commitment to the development of sport in the Baulkham Hills area for over half a century was undeniable. As one of the founding figures of organised sport in the area, Brian assisted with the establishment of the Ted Horwood Reserve, the then Baulkham Hills Sporting Club (now Baulkham Hills Sports Club) and the sporting divisions under the banner.