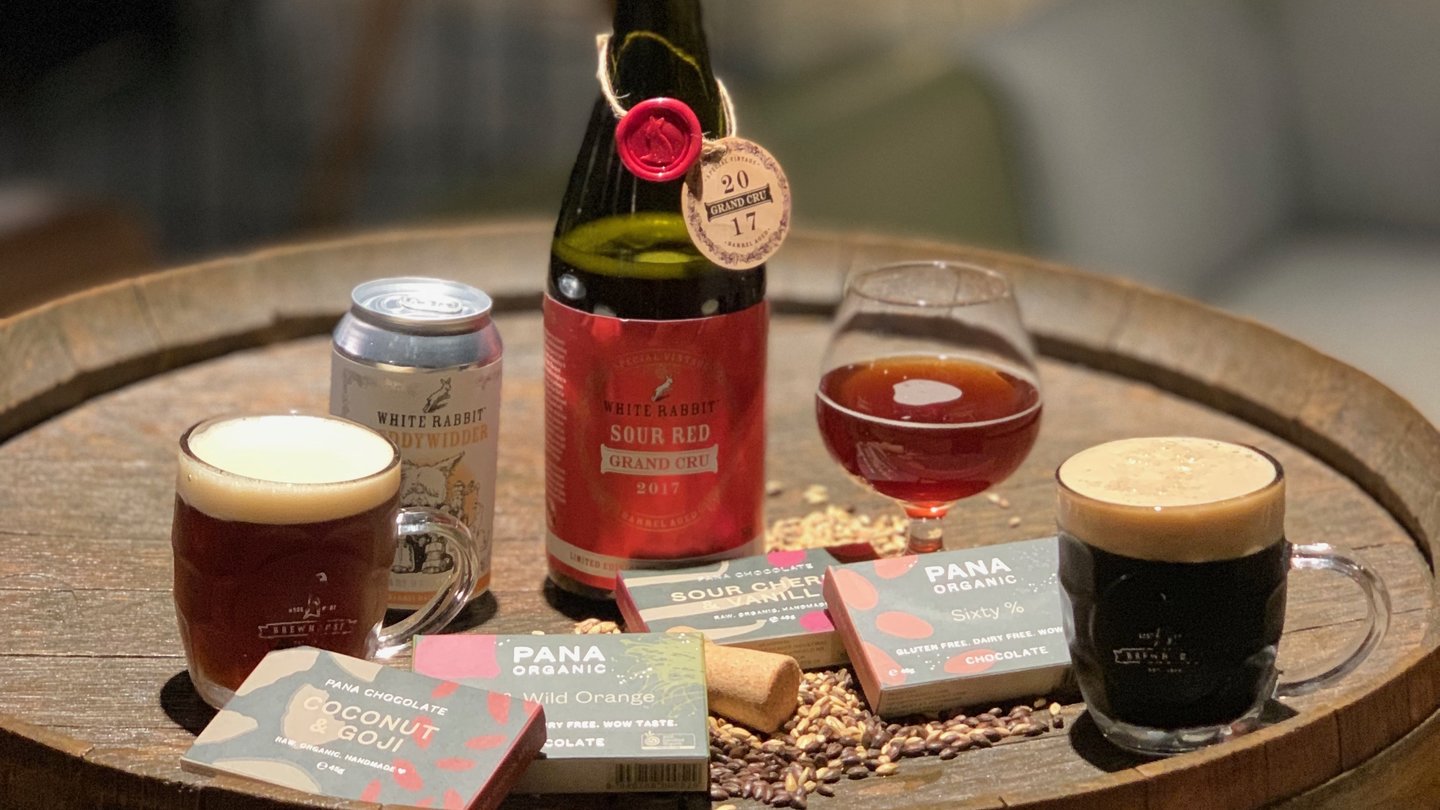 Basement Brewhouse is hosting the largest chocolate and beer pairing event in Sydney over the long weekend, thanks to White Rabbit Brewery and Pana Chocolate. From Good Friday until stock runs out, we will be featuring four limited-edition White Rabbit beers which have been matched with different flavours of chocolate, to bring out the different flavours and aromas.

Each of these beers will be available to purchase separately with complimentary chocolate, or perhaps you would like to try a tasting paddle of the Chocolate Stout, Sour Red Ale and the Sour Red Grand Cru? The choice is yours!

Pop into Basement Brewhouse this Easter long weekend to find out more!

White Rabbit has delicately blended premium brandy along with rich, complex Pana Chocolate cacao, which were both were added late in the brewing process to produce a smooth, velvety stout with distinct chocolate undertones. Just perfect for Easter!

The White Rabbit brewers have let nature take its course, with spontaneous wild fermentation in oak over an extended period of time, creating a very special barrel-aged beer. French oak perfumed with red wine-like complexities, this Flemish red ale is a play on sweet, sour and bitter notes, accentuated by a tart cherry tang, creating a depth of flavour that will appeal to beer, wine and cider drinkers.

WHITE RABBIT SOUR RED GRAND CRU + PANA 60% **LIMITED STOCK**
Maturing beer in a barrel using fresh, wild fermenting shiraz grape juice is part science, part artisanship and part luck. The most important skill to deploy in this process, is patience. Our regular Sour Red is partially barrel conditioned and then blended with fresh, young beer which has only ever seen stainless steel. For the Grand Cru, we’ve taken 100% straight from the barrel, so you get the purest experience of the 2017 vintage.

WHITE RABBIT TEDDYWIDDER (can) + PANA FIG & WILD ORANGE **LIMITED STOCK**
The talented brewers at White Rabbit have been at play once again, utilising intriguing ingredients and unconventional brewing methods to create an ale with unique and complex flavours. Following on from the success of White Rabbit Red and White Rabbit Dark Ale Brewers Cut comes their latest creation, the flavoursome White Rabbit Teddywidder. A Berliner Weisse-style beer, Teddywidder is made from the wort of the white ale, and has a deliciously tart and tangy flavour profile. Its subtle flavours make it perfect to drink by itself, but also exceedingly conducive to flavouring with fruit syrups or purees for complexity, balance and fun.

Originally brewed for the Great Australasian Beer Festival 2013. Teddywidder has been released again in in 2017 in large bottles as a "Barrel Hall Release".